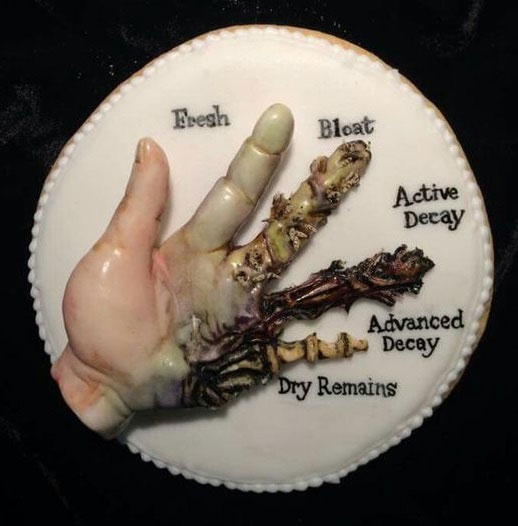 Open most any news site and you can read of a body being found. How long that person has been dead and how they died is determined under careful scrutiny by a forensic team trained in the various stages of human decomposition. By looking for certain signs and taking external factors into account, they can find a great deal of information about how and when death occurred.

Though it’s not something we like to think about, human decomposition, or the decomposition of any animal, is the way nature recycles materials and keeps systems in balance. As tragic and heartbreaking as death is for us, there is a beauty and efficiency about how creatures and the environment assist the body in the decomposition process and return the materials back to the local environment.

However a person died, there are five stages of decomposition that human and animal remains go through as the materials they are made of return to the earth.

As soon as death occurs, the body temperature starts cooling to match the surrounding temperature around it. Without blood and oxygen flow, muscular tissues become rigid and the blood pools into the lower extremities. Then, as the bacteria in the intestines devour the intestinal walls, cells lose their structural integrity and cellular enzymes are released to begin breaking down the cells themselves and surrounding tissues. Microbes also start breaking down carbohydrates, proteins, and lipids. Most of this breakdown occurs inside the body and is not visible from the outside. At the end of this stage, blowflies and flesh flies arrive to lay eggs.

As bacteria multiply and process bodily materials, they produce gasses such as methane, carbon dioxide, nitrogen, and hydrogen sulfide which bloat the body. These gasses build up pressure in the body and push fluids out through natural openings including the mouth, nose, and anus. If insects are present, maggots begin to hatch and feed on body tissues causing the skin to slip, the hair to detach, and the surface to rupture. These additional openings provide even more surface area for insects and bacteria, thereby quickening the decaying process. This emitting of gasses and fluids is what causes the greatest amount of odor during the decaying process.

It’s during the active decaying process the most body mass is lost due to bacteria and insects processing the body material along with liquids being released into the surrounding environment. During this stage, the area of decomposition expands into the surroundings and the most insects are present while they feed on bodily fluids. This stage ends when the maggots leave the body.

By this stage, most soft tissues have already decomposed and only bones, hair, cartilage, ligaments, and sticky byproducts of decomposition are left. Insects with chewing mouthparts such as beetles and certain types of flies are attracted at this stage and arrive to chew on and process this tougher material.

The last stage is when all byproducts of decomposition have dried up and only the skeleton and perhaps some hair are left. Beetles and flies eat anything softer that remains, and mites and moth larvae digest the hair. Exposed to the elements, the bones lighten in color and are eventually reclaimed by the earth.

How quickly a body decomposes depends on several factors: surrounding temperature, whether the body is buried or exposed to air or water, and the number of bacteria present. A body that is exposed to the elements such as air and water will decompose faster and have more insect activity than a body buried or confined in a sealed space. In similar fashion, a body decomposing in warm temperatures will break down faster than if it is left in a cold environment. The exception to this is if the temperature is so hot that moisture, a needed component in decay, isn’t present. In that case, the body mummifies and dries out.

However fast or slow a body decomposes and goes through these five stages, it is nature’s way of releasing the materials back into the earth so new life can be born again.

Alan and team were exactly what I needed after my Dad's fall. Compassionate, caring and so very helpful! I highly recommend Bio SoCal! The crew came and...