You are here: Home / Frequently Asked Questions / Why Does a Dead Body Smell?

When our bodies are alive, there are millions of things our bodies do to keep us that way such as organs that keep our essential bodily functions running such as distributing blood to our body. When those processes are interrupted, though, and the body cannot repair itself, those functions shut down, our bodies die, and many of those things that kept us alive now turn to decomposition and the result is a pungent and odor that infuses into anything that can absorb odor include the carpet, upholstered furniture, clothing, mattresses, paper, cardboard, window coverings, etc.

The Smell of Decomposition

As soon as we die, our bodies start to decompose so the material can be returned to the earth and reused. Typically, a coroner would put our bodies in refrigeration to slow down this process until we are embalmed, cremated or buried. However, when a body dies and is not found right away, the smell of the decomposing body is overwhelming and those who have come across such a dead body smell say it is an indescribable odor that you never forget.

So what is happening to make the dead body smell that way? 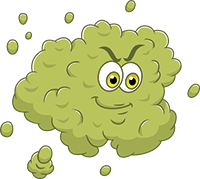 is alive inside the body. Once a body dies and the blood stops flowing, bacteria living in the organs, in the pancreas and intestines especially, run out of nutrients and start digesting the body instead. Once the bacteria have worked their way through the intestines or pancreas, they are released into the rest of the body and all the gas the bacteria have emitted while digesting is released as well. This gas then finds its way out of the body and fouls the air of wherever the dead body has been laid. In fact, even though some gas escapes, so much gas can remain trapped inside the body that the pressure builds and the body will explode. This process of bacteria producing noticeable gas can take 2-3 days.

A decomposing body will typically have a smell of rotting meat with fruity undertones. Exactly what the smell will be like depends on a multitude of factors:

In addition to the plethora of bacteria, there are enzymes digesting cell walls, which eventually break through to the open air and contribute to the dead body smell. Typically there will also be maggots and files there attracted to the organic material decomposing that increases the decomposition by breaking down the matter as it lays eggs in the remains.

The Lingering Odor of a Dead Body

Even after the dead body has been removed and the unattended death has been remediated, there still can be a lingering odor of the dead body. This happens because the odor permeates items made of all fabric and other porous material.