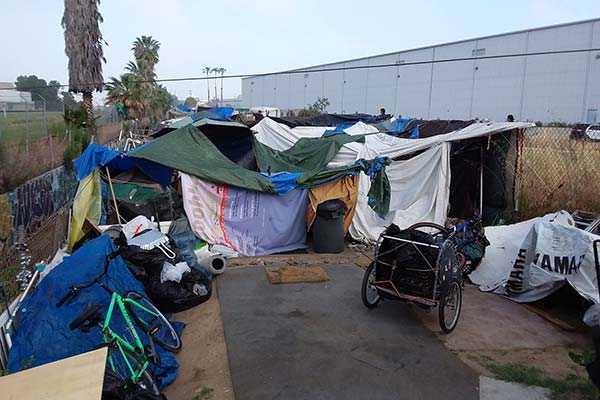 When a homeless encampment needs to be cleaned out in Southern California, Bio SoCal is there to work with private property owners and local cities and counties to make sure the area is restored for the safety of all involved. Without electricity or plumbing, homeless camps can quickly become a health hazard for both those who live there and for the wider community around them. Disease, urine, feces, and usually needles accumulate in high concentrations and need to be removed before causing widespread infection.

This past April we were on scene at a warehouse property in order to clean up the quarter mile long homeless encampment set up along the wash on the edge of the property.

After being given three weeks’ notice to remove their belongings along with being offered a tremendous amount of help and resources, the homeless were assisted by several local agencies including the LAPD HOPE Team, Animal Regulations Officers, and workers from the Los Angeles Family Housing Outreach Team.

Though such cleanup is difficult to do, the homeless were offered both assistance and resources. We treat every person with dignity and respect. Fully knowing that cleaning up the homeless camps is a complex issue, it’s our job to get the sites cleaned out and made safe when called upon to do so. With compassion and empathy, we remove the items and clean up all the biohazards while making sure contaminated items are properly disposed of. By the time we are done, all trace of the homeless encampment was removed and the area safe for anyone who came across it.

Don’t Clean the Area Yourself

If you have a homeless encampment on your property, do not attempt to clean the area yourself. In addition to urine and feces, there can also be drug paraphernalia, used needles infected with HIV or Hepatitis, and dead animals. Cleaning such an area without the proper protection can be both dangerous to yourself and others. 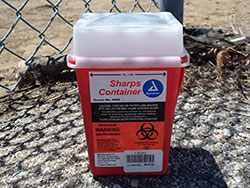 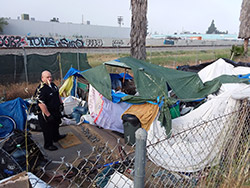 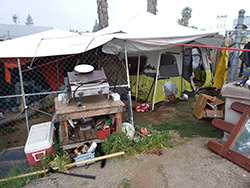 Call Us for Professional Cleanup

Give us a call at Bio SoCal for professional homeless encampment cleanup. We’ll be happy to give you a free quote and consultation along with suggestions on agencies to help the homeless before the cleanup begins.

Alan and team were exactly what I needed after my Dad's fall. Compassionate, caring and so very helpful! I highly recommend Bio SoCal! The crew came and...