You are here: Home / Hoarding / “Too Much Stuff” from The New Yorker Magazine

If you are dealing with a hoarding situation, a thorough examination of the condition and state of hoarding was written by Joan Acocella in a December, 2014 issue of The New Yorker Magazine. The author opens the article with her very personal experience of her aging mother’s onset of hoarding coinciding with her dementia. It’s often very difficult for family members to know what to do to help, and because hoarders tend to isolate themselves, they often get involved after a situation has reached a serious level of concern.

I would get up on a stepladder, with a trash bag, and dump the containers in, one by one. She would stand below me, in her blue robe, her eyes sparkling with—what? Grief? Anger? Eagerness to fill the newly vacated space?

The author explores two very famous hoarding cases; the first is from the early 1900’s involving Homer and Langley Collyer, two wealthy brothers who holed up for decades in their Harlem-area family mansion. The police entered the residence in 1947 after neighbors complained of an odor. Homer was found dead in a chair. It took over a week to find Langley, who apparently had died when one of the tunnels they used to navigate through the debris, had collapsed. 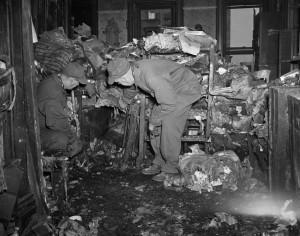 The medical examiner estimated that Langley had been dead for about a month. Homer seems to have died of starvation, waiting for his dinner.

The second famous case involved Big Edie and Little Edie Bouvier Beale, a mother and daughter living in a 28-room mansion in the Hamptons of New York. They became famous first, because Big Edie was the aunt of Jacqueline Bouvier Kennedy, and secondly when a documentary was made about them called, “Grey Gardens.” Their lifestyle was definitely flamboyant and colorful, but also sad and isolating. 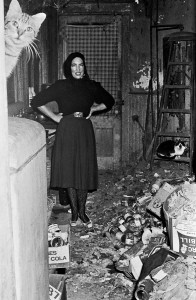 These two rather extreme cases demonstrate the breadth of conditions and symptoms of hoarding. More so, how the medical community has come to understand hoarding has continued to evolve since it was first identified as a condition. And Ms. Acocella notes some startling statistics; that with the aging of the large Baby Boomer population, the prevalence of hoarding cases is expected to increase. Hoarding is common with dementia, although it is a condition that can be present at younger ages and without dementia.