You are here: Home / Death Cleanup / Is the Odor from a Dead Body a Biohazard? 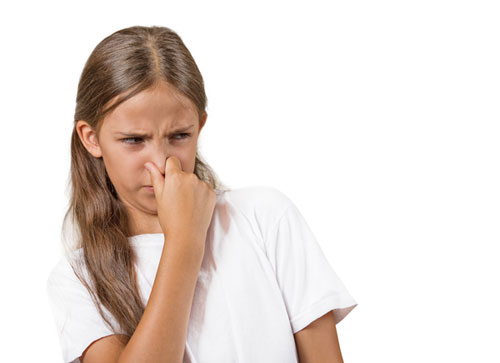 When a loved one dies and goes undiscovered for a period of time, there is an unforgettable and unique pungent odor that remains in a home even after the body has been removed. There is no amount of “airing out” or air freshener that will alleviate the odor. The dead body odor is usually what alerts others that someone has died. The odor is a result of all the gasses released by the bacteria during the decomposition process, which breaks down the bodily tissues from the deceased.

Two of the chemicals a dead body gives off as it decays are cadaverine and putrescine and it is these that are mostly responsible for the smell. Mostly produced by the bacteria during bloating and putrefaction, they are only toxic in extremely large amounts. Other gases include carbon dioxide, methane, and hydrogen sulfide. While dangerous, they are only harmful to humans in large amounts and in confined spaces. In a typical scenario of a dead body decomposing, there are no inherent dangers in the odor alone.

The pungent dead body odor is extremely unpleasant and can be smelled by passerby and neighbors in nearby apartments and condos. The odors will be absorb into any and all porous items including but not limited to upholstered furniture, carpet & pad, mattresses, clothing, curtains, electronics, and anything that soft fabric, paper and foam. The infused items will not only be in the immediate area where the person passed but also throughout the home and businesses belonging to neighbors. In order to remediate the dead body odor and minimize the impact, it’s best to have the odor infused contents removed odor professionally removed as soon as possible.

After the body has been removed from the premises and the entire area professionally cleaned and decontaminated of all biohazards, Bio SoCal can remove any lingering dead body odors and restore the area. Depending on the situation, we have several treatment options including an ozone treatment that will chemically react with and neutralize any odor-causing bacteria in the air. Upon finishing this treatment, will we then air out the area and replenish the oxygen.

Trust Bio SoCal to Restore Your Home or Business

While odor from a dead body isn’t a biohazard, the odor is definitely something you need to have permanently removed because it will not go away on its own. Bio SoCal is the best dead body odor removal company in Southern California and we will take care of the odor in your home, office, boat, or car and restore the area. Please call us if you have any questions or need a free estimate.