You are here: Home / Death Cleanup / How To Get Rid of a Mattress After a Death? 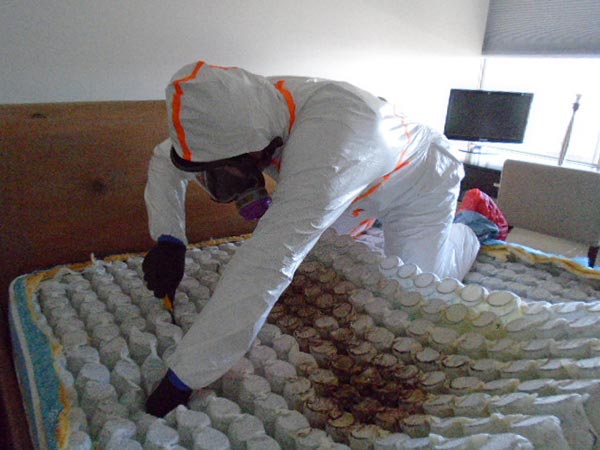 When a death occurs from natural causes, a suicide or an undiscovered death, the person is often found on a mattress of other piece of furniture such as a sofa or recliners. It is likely that the death left behind some bodily fluids such blood and liquefied body fat that must be properly addressed. After the coroner has removed the body and the police have competed their investigation and released the scene, what do you do with the mattress left behind? It is not legal or responsible to dispose of it in the trash.

Don’t Throw It in the Trash

It’s easy to think that putting the mattress in the trash is the easiest and best way to get rid of a mattress after a death. However, it is illegal to throw a mattress away that is saturated with blood and or bodily fluids. So if you can’t just throw it away, what needs to be done?

Deconstruct the Mattress After a Death

The mattress will need to be deconstructed after a death by a trained biohazard technician who will remove the sections of the mares and box sprig hat have been impacted by the biohazards and leave the portions that have not in tact. All sections of the mattress that have ben affected by bodily fluids it must be removed, bagged, transported and properly disposed of according to the laws of California and the Department of Public Health. The unaffected parts of the mattress are removed and disposed of as regular trash.

Handling biohazard waste in a proper manner is important as you or your loved ones can become extremely sick from coming into contact with the biohazard waste and the pathogens that it can carry. You can be held liable for anyone who becomes ill as a result of negligence should the mattress be thrown away before the biohazards have been properly removed.. The best way to get rid of a mattress after a death is to leave it to the Bio SoCal professionals who are experienced in how to protect both themselves and others while helping to get your home back to the way it was prior to the death.

The easiest way to get rid of a mattress after a death is to call a Bio SoCal, a biohazard cleanup company so they can properly break it down and package up the regulated waste and dispose of the mattress remnants and the biohazard waste. Bio SoCal has the proper licenses and is well-versed in all of the laws and regulations. BioSoCal will come to the property, properly contain the biohazards, transport and dispose of it in accordance with the laws of California.

Bio SoCal is Here to Help

If you are looking for someone to help you get rid of a mattress after a death s you cab begin to move forward, call Bio SoCal. We can promptly take care of this for you adn in many cases can help you file a claim with your home owners insurance provider to reduce out of pocket costs